Trump’s travel ban has been revised in the wake of judicial opposition to remove some its most glaringly anti-constitutional provisions. But it remains highly contentious, and in the eyes of many civil rights experts openly discriminatory against Muslims, according to Guardian.

Volunteers will be out in force at many of the major international airports across the country to mark its arrival at 12.01am Thursday. "This second ban is just as unconstitutional as the first as it is motivated by the same religious animus,” said Simon Sandoval-Moshenberg, legal director of the Immigrant Advocacy Program which has been involved in litigation against the new rules.

He added that the call had gone out to volunteers to provide extra legal advice at Dulles international airport at midnight and through Thursday as part of Dulles Justice Coalition, a spontaneous network of activists that has been holding a daily vigil at the arrivals area since the first ban struck in January.

The hours leading up to the scheduled start of the revised ban promise to be fraught and dramatic, with no fewer than three federal courts set to hear emergency arguments over the legality of the prohibition. The first is set to open at 9.30am EST when a group of civil rights and refugee groups led by the American Civil Liberties Union go before US district court judge Theodore Chuang in Maryland.

Later in the day the most important legal challenge is also likely to come before a federal court in Seattle. Several Democratic-led states have joined Washington, including California, Maryland, Massachusetts, Minnesota, New York and Oregon, in calling for the revised rules to be put on hold.

The states are arguing that the amended executive order, signed by Trump on 6 March with a 10-day delay for implementation, is equally driven by anti-Muslim prejudice and that the restraining order that was imposed by the Seattle court in February should therefore be extended. A third legal challenge is set to be heard in a federal court in Hawaii just hours before the ban is due to take hold.

In the revised travel ban, Trump removed Iraq from the list of countries singled out for restrictions and allowed people with permanent resident status in the US and valid visitor papers to enter. But it still imposes a 90-day stop on all new visa approvals for the remaining six Muslim-majority countries – Iran, Somalia, Sudan, Yemen, Syria and Libya – as well as a 120-day ban on refugees attempting to be resettled in the US from anywhere in the world. 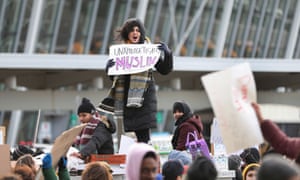 Should the federal courts decline to extend the current restraining order, and in turn allow the new ban to kick in at midnight, all eyes will swing to the main US arrivals ports, notably Dulles, JFK in New York, LAX in Los Angeles and O’Hare in Chicago. When the first ban came into effect on 27 January those airports saw scenes of extraordinary chaos and confusion, and become focal points of mass protests.

Key changes made to the executive order mean that similar scenes of pandemonium are much less likely to be witnessed at midnight tonight. Under the new rules, anyone with a valid visa should be allowed into the country, reducing the likelihood of scores of people being denied entry having stepped off planes from around the world.

"We don’t anticipate the scenes we saw at the airports first time around of people being rejected for entry even with valid visas causing enormous confusion and anger,” said Lee Gelernt of the ACLU, who successfully argued for a restraining order against Trump’s initial executive order in federal court in Brooklyn.Gelernt warned that while the dramatic scenes that marked introduction of the first ban might not be repeated, the impact of the revised prohibition would still have powerful negative implications. "There will be thousands of people across the US who will be suffering as they wait to be reunited with loved ones, and many more living in fear as a result of having their religion singled out and demonized by Trump’s rhetoric.”

Volunteers will also be watching closely from midnight to see whether Customs and Border Protection (CBP) officials at the airports, as well as the airline companies, fully understand the small-print of the revised provisions. Sirine Shebaya, a civil rights lawyer who volunteers with the Dulles Justice Coalition, said it remained to be seen whether the new rules would be implemented properly.

"The revised ban allows waivers to be issued on a case-by-case basis, for instance for family reunion. But will it be clear to every airline that someone with a waiver should be let on the plane, will it be clear to a rank-and-file CBP officer that they should let that person into the country?”

Asked to comment on how its officers would respond to the new travel ban, a CBP spokesperson said: "As a law enforcement agency, US Customs and Border Protection officers are trained, experienced and equipped to operate in emerging and dynamic situations. The travelling public may expect to be processed in accordance with current rules and regulations and with professionalism, dignity and respect.”
Impacts felt around the world

This time, the worst excesses of the travel ban are likely to be felt not in the US but in the six majority-Muslim countries where new visas will now be blocked and in other countries bearing the brunt of the mass humanitarian crisis that the UN said this week was the worst since 1945. Under the travel ban for refugees, set to start at midnight, new approvals for resettlement in the US will be stopped for at least the next 120 days from all over the world.

That will instantly impact 11,000 refugees who have already cleared all their security and other hurdles and are ready to come to the US pending a final visa. Many of those people have already moved to transitional locations awaiting a flight to the US, and may now have to return to refugee camps from which they came.

"They’ve sold everything they owned in the camps, given up their dwelling thinking that they were going to live in the US. Now they will be back to square one,” said Hans van de Weerd of the International Rescue Committee, one of the largest US refugee resettlement organizations.

In addition, there are 61,000 people who are at various stages of going through the application process. The fear for those individuals is that in the course of the 120-day ban some of their security checks might expire, which would push them all the way to the back of the line.

"That’s a real problem. There are going to be a lot of people struggling with insecurity and uncertainty in refugee camps around the world,” said Van de Weerd.

The restart of the travel ban is causing bemusement in countries on the proscribed list, particularly in Syria which is still targeted by Trump unlike neighboring Iraq which has been removed from the restrictions despite sharing a common enemy shared with the US in the Islamic State (Isis). "The United States is in a confusing place,” said Zakariah, 32, from the eastern Syrian city of Hassakah.

"I don’t understand the difference between Syrians and Iraqis, we are in the same situation. This decision from Trump makes no sense, because he claims it is to stop terrorists coming to his country – yet already no one can go to his country without having every single thing in their life checked, and double checked.”

A second Syrian, Mohamed Al-Sheikh, 30, from the town of al-Bab, which was liberated from Isis in February said: "For this, I am not happy or sad. But I feel this is bad, not because of Iraq or Syria, but because of all the Muslims in the area. It is so obvious the US is against the Muslims, even though Muslims are fighting the same enemy as the US.”
In Yemen, where the travel ban also remains and war continues to rage, there is also considerable bitterness. Emad Sultan, 31, from Taiz, now a war refugee in Sana’a said. "None of this is a surprise, it’s very clear that this was coming. Trump is just doing what everyone else has wanted to do but never could. I am on year six of waiting to at least get a visa and I am not the only one. I no longer want to waste my time even considering visiting or building a life in a country where they alienate, attack and degrade us.”

As the executive order goes into effect, there are also likely to be immediate consequences for refugees already resettled inside the US who are awaiting to be reunited with family members. Medya, a Syrian-Kurdish refugee living in Buffalo, New York, was brought into the country last November, a week after Trump’s election, with two of her siblings.

She was expecting her parents to join her shortly after, but their flight was cancelled. "They gave no reason, so I don’t know exactly what’s going to happen,” Medya, who asked only to use her first name for fear of making her relatives’ position more untenable, told the Guardian.

Medya and her family crossed the border from Syria into Kurdistan in 2013 after months of trekking on foot. They were approved to resettle to the US after going through around two years of vetting, she said.

She said she had been afraid to leave her father behind as he has had four heart surgeries and is unable to work, depending on Medya and her sister for income. "They need me. If I know that I will be here [without them], I will not come,” she said.